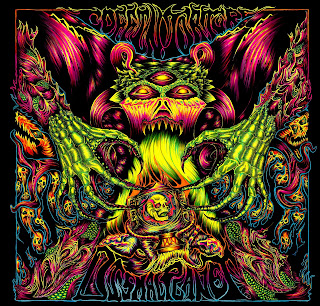 Coffin Torture couldn't really have chosen a better name for their album. Dismal Planet works as both a reference to the state of the Earth in these times and as a reflection of the gargantuan sludge/doom the duo rely on to break up all that wax crusting up your ears.

Thorfinn handles guitar, bass, and vocals with Blind Samson handling drums, keyboards, and samples. You'll have to listen hard for those keys and samples but that's okay because this begs to be cranked to maximum volume. Secure any loose items first unless you want them on the floor. The level of low end distortion emanating from the speakers registers on the Richter Scale. It's a planet-sized record bleeding filth and darkness enough that “dismal” could be the most appropriate descriptor needed.

Coffin Torture work through a variety of tempos but by and large they operate on two levels; doom and sludge. Slow and not as slow. The faster parts are really driven by the percussion as the fuzz truly permeates the auditory spectrum and flows into one overwhelming wave of distortion. Layers stack upon one another until it creates a sound so thick and sustaining that silence is just not an option. The notes though are not hidden by the blanket of sustained noise affecting every nerve in your body. They just resonate. The notes hit like hammers and leave a lasting impression of residual amplifier strain.

The nuance here is subtle but effective. A ringing phone here, some psychedelic flavouring there, etc. In a way the straightforward nature of their low-slung sludge-conjuring doom doesn't have much to say but when the music holds you down and delivers this much pain the most poignant things to say don't even come out as words. In much the same way the lyrics come as perhaps less important than the way they are expressed. I'm sure Thorfinn would disagree, and I'm not trying to discount lyrics in any way but you can't help but feed off the rawness of the vocals.

It's pretty obvious what you're getting with Dismal Planet. Mountain-crumbling doom fused to sick sludge riffs heavy enough to affect your gas mileage. Coffin Torture bury the listener neck deep in fuzz then deliver a righteous beating that only dents the wall of distortion. Duos like this have a way of getting in, kicking ass, and getting out before the supernova explodes. Explode away. 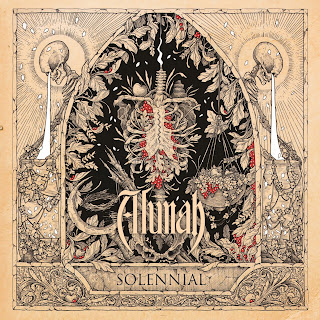 Hey! Yeah, I meant to get around to posting this weeks ago but life gets in the way. Life is continuing to do that so I'm just going to post my Top 20 of 2017 without blurbs and stuff. Just the band, album, label and a link. That should be enough, eh?


Until next time!
Posted by Matt Hinch at 7:33 PM No comments:

Email ThisBlogThis!Share to TwitterShare to FacebookShare to Pinterest
Labels: metal, Top 20 of 2017

I think most of us were ready to put 2017 to rest. It was a tough year. I've had some personal hardships and some musical favourites have passed on. But 2017 wasn't a bad year for music. I really had to throttle back on the number of new releases I tried to consume. And I unintentionally cut way back on my writing. I'll try and fix that in 2018 but I can't make any promises. But in listening to fewer albums I was able to dedicate more time to the releases that I really enjoyed. That made making this list relatively easy as there weren't many other albums that I kept circling back to or that I could turn to no matter my mood. So know that I feel strongly about my picks. There will be some glaring omissions but I regret nothing.

30. Cavernlight - As We Cup Our Hands and Drink From the Stream of Our Ache (Gilead Media): You want misery? You got misery. This is the most miserable, depressing release I heard all year. Mind you, depressing music doesn't actually make me depressed so we're all good! But seriously, this kind of doom will break a person.

29. Young Hunter - Dayhiker (Fear and the Void): This one took some time to grow on me but when it did it spread like a fungus. Not necessarily a psychedelic fungus but visions of captivation by its subtle groove, smooth guitar work, and vocal interplay definitely danced in my head. Emotional. Soft yet heavy. Highly addictive.


28. Extremity - Extremely Fucking Dead (20 Buck Spin): How could a band consisting of Shelby Lermo, Aesop Dekker, Marissa Martinez-Hoadley and Erika Osterhout NOT kick ass? I'll have you know it kicks plenty of ass. Death metal ass. In "The Year of Death Metal" it's the fresh blood (er, new bands) that did the most damage to my ears. Brutality reigns!

I can't get the bloody embed to work. Click here for Extremely Fucking Dead on Bandcamp.

27. Bison - You Are Not the Ocean You Are the Patient (Pelagic): I see the Van City sludge stalwarts were able to drop the b.c. from their name. That's nice. It doesn't mean their riffs contain any fewer middle fingers though. New bass player, new label, same heaviness. I remember my bangovers from seeing them live and this one gives me the same feeling without even moving.


26. Woodhawk - Beyond the Sun (self-released): Woodhawk riffs are sweet riffs. Songs about Star Wars earn bonus points. A guest appearance by Kevin Keegan ices the cake. But all you really need are the riffs. Woodhawk put the whole package together with great songwriting, extreme catchiness and vocals you can sing along with. Hard rockin' and easy ridin'!

25. Void Ritual - Heretical Wisdom (Tridroid): If you're craving the icy pain of Scandinavian black metal but prefer it searing your flesh in the New Mexico sun, look no further than Void Ritual's debut full-length. Daniel Jackson threads powerful and gripping darkness right into your bones all while scorching a path of destruction through a vortex of determination. Dude just flat out rules.

24. Unearthly Trance - Stalking the Ghost (Relapse): 2010's V got me through many a cold Canadian Winter's night. I feared that may have been the last we heard of Unearthly Trance. I was extremely pleased when UT resurfaced to spread filthy doom across more frigid midnights. Scowl as you must and bang with all you've got; that ghost isn't going to stalk itself.

23. Necrot - Blood Offerings (Tankcrimes): FUCKING DEATH METAL!!! I can't dig all these death metal bands making things all weird and shit. I want death metal to kick me in the mouth over and over again with skull-cracking riffs that I can actually headbang to. Necrot give me all the old school death feelings I crave from the downtuned, guttural vocalized, bone-breaking end of the metal spectrum.

22. Electric Wizard - Wizard Bloody Wizard (Spinefarm): Electric Wizard could put out an album of cow patties hitting the ground turned into riffs and I'd fucking buy it. But that takes nothing away from their newest effort. The British doom institution delves into Uncle Acid territory on this one but maintain their classic EW identity in the smokey haze that proves eternally addictive.

21. Cavalera Conspiracy - Psychosis (Napalm): Max Cavalera is basically metal royalty to me so it was a given that anything he put out this year was going to show up on this list. CC's latest doesn't disappoint with its varied attack. The Cavalera Bros. tear shit up like only they can and manage to sound less like Soulfly than on previous albums. I spent more money on this album (deluxe box) than any other this year and it was totally worth it.