Originally posted at Hellbound.ca along with the picks from the rest of the team.

10. Domestikwom - Pater Vita EP (self-released): Domestikwom is a one man black metal project from Jonathan Petkau. I like to think “domestikwom” means “pet cow” in a language I don’t know. But this isn’t a funny EP. It’s admirably bleak and cut with electronic touches and somewhat morose spoken word. The atmosphere is spread thick over the dynamic whole. This project has plenty of potential. Wait, were those horns?

9. Harangue - No New Prey (Pluto Records): I’ve been repping Harangue since Day One, yes. But this TOHC crew continues to impress. No New Prey shows an increased range while still managing to piledrive the listener into paralysis. Well, at least you’ll be paralyzed after moshing like a madman to their take on ‘90s Hardcore. I can still hear those little hints of Helmet too. This band is underappreciated to say the least.

8. Black Wizard - New Waste (Listenable): Who doesn’t love a good riff? I know I do. Black Wizard do too. So they packed New Waste with riffs. Of the stoner rock kind. I’ve passed a joint and drank beers with these guys so I know their laid-back-but-edgy sonic aesthetic isn’t a put on. Some good times were had in 2016 getting wasted with New Waste!

7. Forteresse - Thèmes pour la Rébellion (Sepulchral): I can be pretty picky with my black metal but I like this kind. Depraved vocals, soaring tremolos blazing across dark skies, and jackhammer percussion. It’s relentless and epic if not exactly original. Originality is hard come by while staying within genre boundaries but when done this well it doesn’t matter. It’s one of my favourite black metal albums of the year, Canadian or otherwise.

6. Olde - Shallow Graves EP (self-released): Do you like Eyehategod, Buzzov*en, -(16)-, Bongzilla, Crowbar and other sludge acts of that ilk? Then you’ll like Olde. They’ve got an LP coming out on STB next year but this year’s EP is enough to satiate even the biggest Olde appetite. Gravelly vocals, endless killer riffs, tone for days and an all-star cast from the Toronto scene. What more do you want? How about a Motörhead cover? DONE. Besides, have you seen how cool those motherfuckers look in their bandcamp cover photo? DOOM ON!!!

5. Begrime Exemious - The Enslavement Conquest (Dark Descent): I can get picky with my death metal too (note the lack of Chthe’ilist, Auroch or Phobocosm) but I’ve no problem with the raw, raging death of Begrime Exemious. They’ve got the kind of old school, foot to the floor approach that causes concussions and makes chiropractors see dollar signs. I really should get a copy of this on CD but it might make driving dangerous. Oops. Just ordered the t-shirt bundle.

4. Astrakhan - Reward in Purpose (War on Music): Like their Vancouver brethren Anciients, Astrakhan can be classed as progressive sludge. Astrakhan however replace the former’s deathly edge with an almost doomy feel. And more melody than you can shake a stick at. But their real game changer is the vocals. Toth and Zawistowski soar and scream and harmonize and raise the album above the considerable heights achieved musically. The reward here is letting the album consume you.

3. Public Animal - Palace Arms (Yeah Right!): I knew a couple of Public Animal songs before I saw them play with Olde. And I was somewhat familiar with Bionic and C’Mon. But now nothing makes me feel as good as Palace Arms. It’s an instant pickmeup. Ian Blurton is a national treasure. Caitlin Dacey is as wondrous as DisneyWorld fireworks. Eric Larock and Ryan Gassi are the rhythm section sent from the gods. Palace Arms is psychedelic garage/prog rock fire to fall in love with.

2. Blood Ceremony - Lord of Misrule (Rise Above): I literally cannot get enough of this album. Keys, flute and all. Alia O’Brien is incomparable. But that wouldn’t mean a thing if the band didn’t rock like they do. Vintage occult rock virtually without equal. Their spell over me cannot be broken. There hasn’t been a single moment since I got the promo that I didn’t want to listen to and absorb this. Captivating doesn’t even scratch the surface. And my kids don’t run away when I play it. 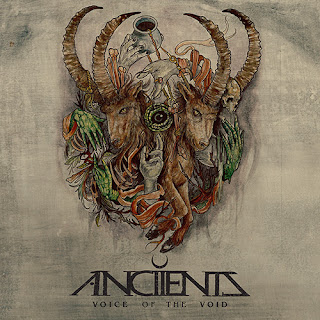 1. Anciients - Voice of the Void (Season of Mist): Recently someone commented that Voice of the Void is soulless and boring. I don’t want what they’re smoking because I find this soulful and exciting. The multi-faceted vocals are spectacular, the solos deliver all the goods and the prog on display is well-crafted and balanced with the crushing sludge. This is only their second full-length, man. You could say they haven’t even hit their stride yet as you know, that’s kind of the point of progression. This is even better than Heart of Oak so I’m really looking forward to loving what’s next even more.
Posted by Matt Hinch at 8:20 PM