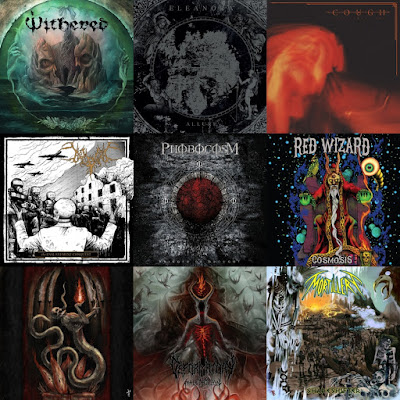 Ok, so there's no way I'm going to get this done every week but I have a plan. I don't know quite how to execute it yet, but I have one. In the meantime, now that I fixed my last.fm scrobbling issue (sort of) you can see what the last few days had in store.

The return of WITHERED!!!! Their "tortured blackened doom" has added more death to the mix here. They've also added Colin Marston on bass and his presence is definitely felt. Far from a instant gratification type album you've really got to crack this one open.

I'm used to having Consouling release albums with an ambient side. Eleanora however obliterate ambience. Their allure comes from a savage, sludgy, hardcore place that builds up primal urges in the listener. Disgustingly good.

You know you're getting heavy-ass shit with Cough. It was produced and recorded by Jus Oborn of Electric Wizard with Windhand's Garrett Morris.  I can hear that. Massive slogging doom. There's no medicine for this and prayers don't work.

Vicious, searing, crusty, blackened, thrashing death. Canada has a tonne of great bands but Begrime Exemious are one of the best. They continue to pummel brains and terrorize eardrums on this latest release. I really should order physical copy of this. Perfect for raging out in the garage when I need to blow off some steam.

Another deathly Canadian product! The difference here is Phobocosm are fucking weird. Eternally dark and twisted, they make you feel uncomfortable all the time. It's terrifying and technical death that lurks close to the floor to drag you into nightmares.

Ripple Music and STB Records are two of the kickin'-est labels going. And Red Wizard are pretty kickin'. Fuzzy grooves and dirty bellows abound amidst no frills stoner rock. Bands like this (and their labels) bring back memories of the good ole Man's Ruin days. Cosmic!

Malicious Malaysian death/black metal! This one-man project exudes darkness and the stench of foul beings. Crawling doom atmosphere, varied tempos, soul-swallowing vocals. If this is just a demo, the world is in serious trouble.

The third of four Canadian entries. Ottawa's Deformatory brutalize with speed and dexterity while keeping the wankery to a minimum. They're not inventing any new tricks but that's not an issue when you can channel bands like Suffocation to devastating effect.

Blistering thrash from Edmonton pulling from the wild and crazy heyday of speed metal and injecting bitchin' vocals into the guitar fury! It reminds me of the neo-thrash savagery of bands such as Warbringer and Havok, even topping those bigger names. MORTILLERY FUCKING RIP!!!!