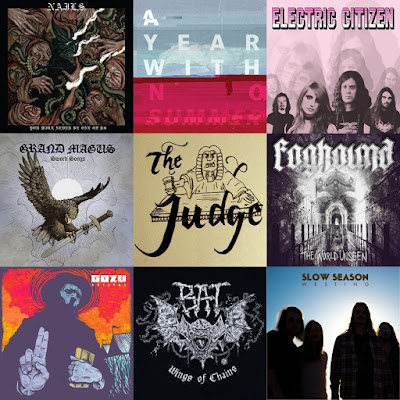 Let's face it. There's no way I'm getting this done every week. But at least it's something. Here's some of what has rattled my chains in the last week.

Well, frontman Todd Jones has been taking some heat this past little while as a reaction to his own hot headedness. I won't go into specifics but it's not like we didn't expect Jones to blow his top at least once during this album cycle. Maybe it wasn't even Jones. Who knows on social media? Moving on, this newest "full length" keeps driving the way Nails fans expect. I like it. It's good but I don't think it's the AOTY candidate some are touting is as. But really, if you want super aggro, tear your arm off and beat yourself in the head with it hardcore, Nails will help.

Obsidian Kingdom - A Year With No Summer (Released March 11, 2016 on Season of Mist)

I'm sort of surprised this is still hanging around on my phone. But it's got that little something that halts tapping delete. Lots of melody and plenty of hooks. The "progressive rock" tag doesn't really do them justice as that makes the album sound weak. Which it's not. The power is emotional and it's all wrapped up in good songs that make tapping repeat all too easy.

If one thing is going to catch (and keep) my attention it's groove. EC spreads the groove nice and thick on Higher Time. It's one of those albums I can dig whenever and wherever. The saturation of killer riffs is total. It's got that dirty tone of the old school and an abundance of hooks. And vocalist Laura Dolan comes in as the clincher. Smooth, soulful, just a bit of grit and a perfect complement to the heavy rock power. Any time spent with this will take you higher without question.

Dude. I shouldn't have to tell you about Grand Magus. The Swedes have been dishing out the battle hymns for long enough now. But that doesn't mean they don't still make albums worth listening to. Sword Songs is simply the latest is a long line of epic albums steeped in themes that traditional metal was born from. And in this case that means Vikings. Leather and steel. Sharp and tough. Horns up!

More groove! I went on a bit of a kick where all I wanted to listen to was stuff that reminded me of the old days when stoner rock was LIFE. Bluesy and rockin', The Judge give me the ole heavy eyes. It's another album that makes me not feel so bad about being born too late. Sure, being there in the '70s would have been great but with albums like this around to capture that feeling you get the best of both worlds. (Note: That's the cover of their EP above. Not this LP. But it's right below. Silly internet.)

Are you feeling the theme of this week yet? Seriously heavy on the hard rock/stoner bands. Foghound keep that going. They definitely bring the riffs. And the swagger. They've got a real southern sound that betrays their Illinois locale. They make me want to drink beer and throw my back out. A sore neck is almost a given. "Serpentine" is a definite highlight. Get fucked and get down.

Let me tell you! This album is one of the best I've heard this year! It hits those sweet spots that get my motor running. Hard driving riffs, killer tone, and dynamic vocals. Depending on the song, you can pick up the sounds of other bands that run in the same circles but it never feels like they're ripping them off. It's a diverse effort full of rockin' and rollin' fun. These dudes are definitely in it to win it! I just can't get enough of these Boston boys! FFO: Goatsnake, QOTSA, Fu Manchu, etc.

First things first. Ryan Waste (Municipal Waste), Nick Poulos (Volture) and Felix Griffin (ex-D.R.I.) combine their powers on this raging speed metal beast. The pedigree is unquestionable and the trio does not let you down. Filthy, dirty and loose, it's a rager that combines the snarl of punk rock with the power of metal. What else did you expect? Well, expect plenty of air guitar and banging heads.

Alright, alright, alright! This is the kind of hazy, laid back stoner rock I'll dig all day, man. By far the most psychedelic of this group of bands, they take the listener on a blissful trip full of fuzz and retro sensibility. They nail the vintage feel through both sound and production. You can really escape your worries with Westing. Just tap into the plane they're on and ride it all out in hypnotic splendour. Like many of the bands above, but more so than any, Slow Season bring the aura of the old days up to the present but wouldn't it be cool if this was some lost gem? Nah, this way we can get new music from them for years to come! And I for one, want them to continue guiding my trips.