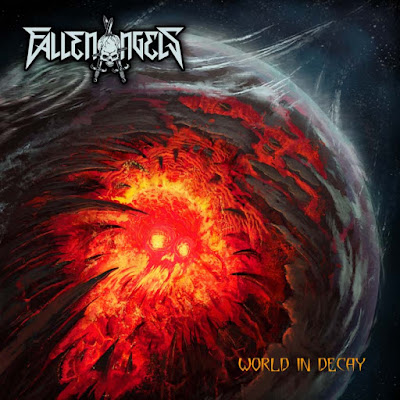 A band from Seattle of all places that’s steeped and schooled in the art of ‘80s Bay Area thrash? Yup. Fallen Angels prove that grunge didn’t finish the job. Their third album, the Michael Rosen produced World in Decay couldn’t be thrashier.

The quintet is locked tight with dual leads battling amid razor sharp rhythms, prominent bass keeping up, and vicious percussion holding down the fort. The musicianship here was never in question. But can they write songs?

Sure. These nine tracks of pure thrash attack are well-composed operations that keep up the adrenaline with timely breaks in the aggression letting the listener catch a breath. Throughout they show off their ability to induce the kind of furious headbanging and fist pumping that thrashers live for.

One can hear their careful study of classic acts such as Metallica, Megadeth and Anthrax as well as second-tier thrashers. With those pitiless riffs and blazing solos Fallen Angels can hold their own against today’s collection of neo-thrash flag wavers like Havok and Evile.

Fallen Angels aren’t blazing any new trails but they’re running along those well worn with enthusiasm, skill and a healthy appreciation for their roots. Thrash on, brothers. May patches be ever on your jacket.