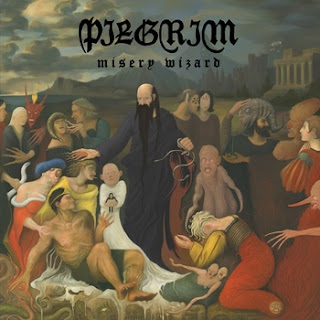 I don't expect to take any heat for putting Pilgrim's Misery Wizard so high on my list but, I don't recall seeing it on any other lists. But that's okay. It's my own little gem. A little gem that holds down the #2 Most Played position for 2012. The album moves as fast as an amputee in 3 feet of snow which makes it feel as heavy as a lead tunic. The clean vocals beg to be sung at absurd levels with arms stretched wide, palms turned upward in praise. The album's six tracks crawl by in a sub-Sabbathian manner over the course of nearly an hour. However, "The Adventurer" provides a boost of energy before the monumental closer "Forsaken Man". Monolithic riffs, mountains of feedback (feedback makes me giddy), and powerful sing-along vocals adorn this massive slab of soaring doom. Slow and hypnotic, it entranced this listener over and over, ad infinitum.