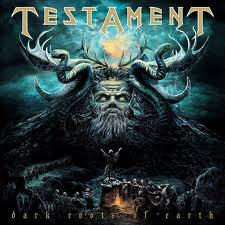 I was first introduced to Testament in a friend's car back in 2001 outside the bar where the staff Christmas party was happening. Needless to say, Testament was better than any of the crap that was playing in the bar. The band kinda faded from memory from that point til The Formation of Damnation was released. With that album and this year's Dark Roots of the Earth, Testament have usurped their thrash metal brethren. The last two albums have been far and above anything released from the "Big 4". There's really no other way to state it other than this album is fucking awesome!! Chuck Billy's very poignant lyrics and Alex Skolnick's slick guitar work meld to create just an amazing album. And did I mention the incomparable Gene Hoglan on drums? I mean really. Sickeningly catchy with songs that actually mean something makes Dark Roots a must-have for any thrash fan. This is another one of those albums that makes me really sad I can't grow my hair out long. Well, I could but it would be a skullet and the wife won't go for that. Hahahaha. In the meantime, I'm content to thrash away and air guitar my balls off to Dark Roots of the Earth. This is metal. My real good bud Todd might gimme a blast of hell for ranking this so low but dude, you know this kicks major ass and I could spin it every day without hesitation.