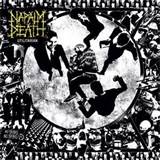 I can't say I've been a lifelong Napalm Death fan. Solely because I had never heard them prior to Enemy of the Music Business. But I've been a fan since then! My appreciation of the band reached a whole new level when I saw them play in Kingston back in October 2011. That date was the first of the tour that saw them premiere the song "Quarantined" from Utilitarian. What a privilege. So it was with great anticipate that I awaited the release the album. And it was not disappointing. Unquestionably a Napalm Death album, Utilitarian did have some surprises up its sleeve. Such as the free-jazz saxophone blast on "Everyday Pox" (which I'm still not sold on, by the way.). Guitarist Mitch Harris's shrieks complement the mad mastiff barks of Barney Greenway as the incomparable rhythm section of Shane Embury and Danny Herrera complete the fury of Utilitarian's socially conscious, highly intelligent and thoroughly vicious grindcore. I'll end this blurb with the only phrase I wanted to use. (Which wouldn't have made for very interesting reading)

It's fucking Napalm Death! What more do I have to say?
(Century Media)

Napalm Death Official Site
Posted by Matt Hinch at 6:01 AM