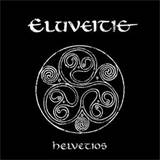 I don't think anyone was more surprised that I liked Helvetios more than me. Let alone that it would end up in my Top 25. In general I'm not a fan of folk metal. I can't think of a folk metal band other than Eluveitie that doesn't make me gag. (Primordial is not considered folk metal, correct?) What it is about Helvetios that has captured my heart is hard to say. There must be some intangible that has connected with me. The hurdy-gurdy, the flute, the story telling, the uplifting melodies, the way it makes me want to dance a jig and headbang at the same time? Who's to say? All that needs to be said is that this enjoyed HEAVY rotation all year long.  I vaguely recall not being stoked on previous releases from this Swiss collective but I love love love Helvetios. But don't think this will be some kind of folk metal gateway drug. I've taken a stand and I...will not...BOW!!!!!!
(Nuclear Blast)