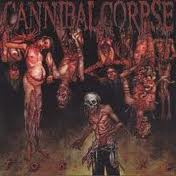 It's Cannibal fucking Corpse. Justification done. Fine, I'll write more. No one reading this can deny that Cannibal Corpse are the undisputed Kings of Death Metal. For 25 years now Corpse has been soaking the death metal landscape in blood, guts and gore. Torture is no different. George "Corpsegrinder" Fisher's hyperspeed growls, guttural bellows and shrieks front unfuckwithable musicianship. (Kneels at the feet of Alex Webster.)  For the most part, CC don't change up the formula on this release maybe other than "Scourge of Iron". It's pace is dropped back to a relative crawl. A comparative zombie in lead boots. But I can almost guarantee that lurching rhythm will be the riff stuck in your head. To reiterate. Cannibal.fuckin.Corpse. Torture. Don't make me (insert paraphrased Cannibal Corpse album title) you.
(Metal Blade)