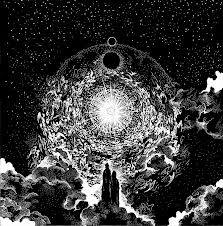 Yet another debut full length makes the list in the form of Empyrean from Mutilation Rites. This is one seriously vicious album of depraved American black metal. Yeah, it's depraved. It's American. And it sounds like it was made by depraved Americans. The album is relentless. Blistering speed is paramount yet the band can pull back when need be. But even at the tempered speeds, Empyrean is still punishing. Maniacal screeching vocals, filthy tone and killer riffs, and sickening drum work bring Mutilation Rites to the forefront of the blackened metal scene on this side of the pond. It's disgusting, it's grimy, it's sinister in every way and it gets better every time I hear it.

(Prosthetic Records)
(But I also recommend the vinyl from Gilead Media)

Mutilation Rites on Facebook
Posted by Matt Hinch at 3:27 PM