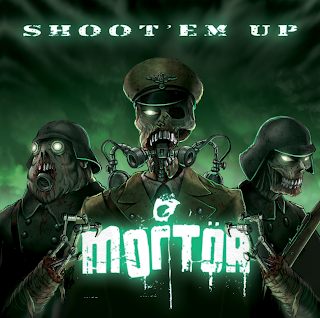 I find myself typically listening to a lot of doom, sludge, black metal, death metal and various mutations and mixtures of said genres. So, when this Mortor album turned up in my mailbox, I was struck with a refreshing change of pace. These Ottawa death-thrashers play a straight up, no frills, headbangin' style of metal on Shoot 'Em Up  This album is another notch in the bedpost of what is turning out to be a stellar year for Canadian metal.  What Mortor brings to the table is much like a home cooked meal. You pretty much know what to expect (death metal and trash) but all the same it's wholly satisfying and nourishing. This is not to say that Shoot 'Em Up is bland or lacking in excitement (like mashed potatoes EVERY FUCKING DAY. Sorry Mom). What I mean here is that Mortor is not out to dazzle with a flashy display disguising a lack of substance.
Founded by rhythm guitarist Dave Paquette and rounded out by drummer Jay Cross, Bassist Jonathan Boulay, lead guitarist Antonin Perras-Foisy and vocalist Yolin Lafreniere, Mortor packs that meal for the road and carries it through 14 tracks of solid and muscular metal sure to put hair on your chest. Part of the appeal of the album is while Mortor draws influence from some of thrash and death metal's best, they don't sound like they are ripping those bands off. The familiarity of the overall sound puts the listener at ease and let's them connect with the music in an effortless way. However, the lyrics aren't likely to put anyone at ease. Lafreniere's death metal bark is all about the violence, war, guns, guns and more guns. But that much should be obvious given song titles like "Locked and Loaded", "Trigger Happy", "For Glory" and the title track. His vocals may not be the most dynamic but I'm a sucker for good death metal vocals. In this case, they remind me of early Cannibal Corpse or even Nathan Explosion of Dethklok, but my initial thought was of Krisiun's Alex Camargo.
Comfortable at a range of bpms, Shoot 'Em Up never sounds like the same song over and over. From the blistering "Trigger Happy" to the chugging parts of  "Clusterfuck", and the mid-paced banger "Infidels", your neck should get a varied work out. While you're busy giving your chiropractor fits, the shotgun spray of catchy riffs will bury themselves deep in the flesh. With almost all of the tracks clocking in at less than four minutes, Mortor is a very efficient unit. Each song a well-planned mission bent on accomplishing the goal without compromise and no prisoners. Perras-Foisy's slick leads, Paquette's pummeling rhythms, Cross's concussive percussion and Boulay's rock solid bass combine to create a well-trained force fueled by the meat and potatoes of classic death metal and thrash. There's even some hardcore punk flavour thrown in on "Let's Deflagrate" (that bass lead is sick! Pardon my slang.) just to throw the enemy off.
Produced by Augury's Mathieu Marcotte and mixed and mastered by Cryptopsy's Christian Donaldson, the album is crisp and clear without sounding overproduced. I usually don't comment on production but in this case it really stood out for me. In addition, Marcotte and Donaldson lend their shredding talents to the solos on "For Glory" and "Point Blank" respectively. Shoot 'Em Up is a full clip best unloaded at full volume. It fires on all cylinders and finishes in a blaze of glory. No need to ration as Mortor serves up a full meal between an appetizer of Six Feet Under's Undead and a dessert of Testament's Dark Roots of the Earth. Eat up, Soldier.