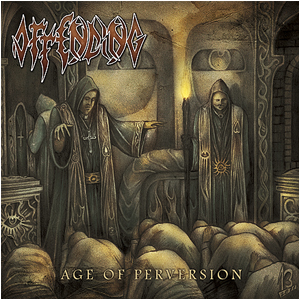 This album was kind of weird to me. Not in an avant-garde, these guys are messed up, what the FUCK is going on? kind of way though. No, it's relatively straightforward stuff. What I mean is, Age of Perversion made me think. In a relevant yet unexpected way. It made me wonder just where death metal is headed. There is the uber-technical direction but bands like that (Obscura, Cynic, etc) don't really appeal to me. I much prefer my death metal more in the old school vein. Which is precisely what France's Offending delivers. Age of Perversion doesn't stray much from the foundations of OSDM laid down by the sub-genres forefathers. The riffs ripped from the phalangeal appendages of guitarists Gropoil and Manu drip with brutality, with a slight waft of ominousness. Bassist Yoni fills in the low end with equal dexterity. These three one-named axeslingers assault the listener with a level of technicality that has come to be expected of modern death metal without going over the top. The basis still lies in the realm of DM-catchy, chugging machine gun riffery and double-kick, blastbeat percussive castigation (courtesy of drummer Vincent Roubiere. Two names!).
Whether or not you find Offending offending all depends on which side of the Christianity fence your sitting on. Or at least how firmly you are on the "God is great!" side. Song titles such as "Raped by Religion" alone could be enough to get the fundamentalist's feathers ruffled. The rest of the song titles make the message clear; Christianity has soiled and corrupted its people and blinded them to the truth. Spouting these diatribes is none other than Jesus. I could be wrong but I don't believe the singer pronounces it Heyzoos. That would be way too coincidental. No, the irony of anti-Christian bile being spewn with (predictable but always welcome) death growls by a man calling himself Jesus is just too juicy.
Back to my point. The state of death metal.  Age of Perversion utilizes the same elements countless other OSDM/Brutal DM bands do. I found it to be just as enjoyable as other death metal releases, and even more enjoyable than other, bigger names. (I'll leave you to guess who.) Which begs the question; Why aren't Offending a bigger name? Is there that much parity in the genre that its successes are measured by their branding ability? I may be going overboard a little here. I'm not trying to say that Age of Perversion should be a death metal classic or anything like that but there's really nothing here not to like. Provided of course you prefer your death metal to sound like death metal. Just like everyone else.
Age of Perversion is available now from Deep Send Records.
Please note: The Metal Writers Association of the Greater Forest Mills Environs has insured that no writers were offended in the making of this review.
http://www.facebook.com/pages/OFFENDING/150646044483
http://www.offending.fr/
www.deepsend.com
Posted by Matt Hinch at 7:13 PM